Share with ShareThis
Home | The Seaway | Our Locks and Channels

The Seaway system is connected by 5 short canals. They include 15 locks, filled and emptied by gravity.

Together, the locks make up the world’s most spectacular lift system. Ships measuring up to 225.5 metres in length (or 740 feet) and 23.8 metres (or 78 feet), in the beam are routinely raised to more than 180 metres above sea level, as high as a 60-story building. The ships are twice as long and half as wide as a football field and carry cargoes the equivalent of 25,000 metric tonnes. 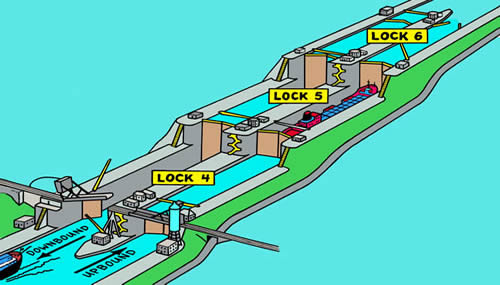